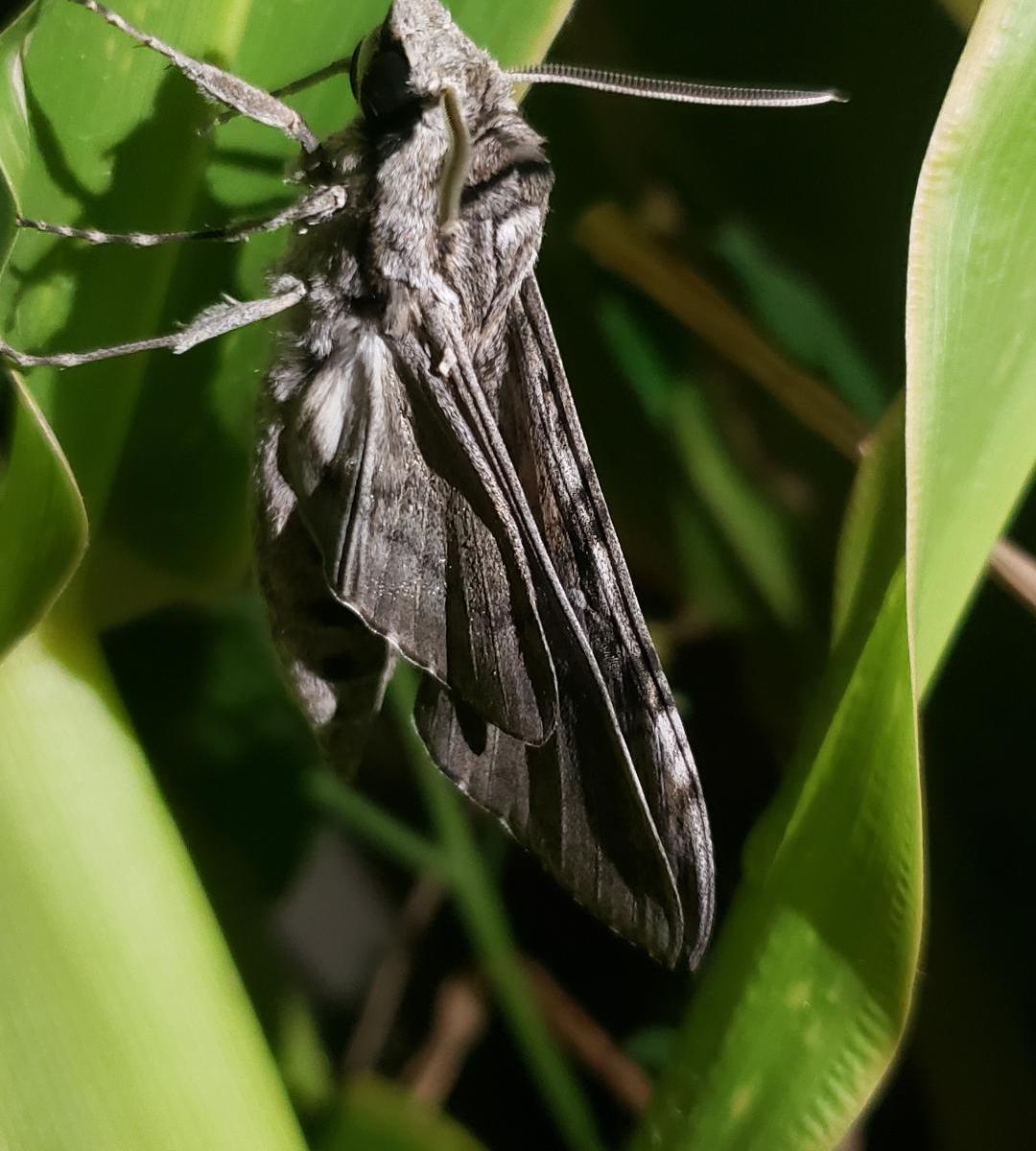 Tonight is a special night in the garden. I was out late around 9:30pm to water the plants. It had been a hot sunny day, and I decided to give the garden some attention. Especially now that it is becoming summer here in Saudi, I go out at night to water the thirsty plants. While I was in the process of showering the sweet potato vines, I noticed a small blob drop and then saw a hurried figure with wet wings on it’s back, scurry across the walkway and into the shadows by the pots. I immediately stopped watering and watched where it would end up, as I was pretty sure it was a moth. At first I thought it might have been a tiny bat!

It was a noisy animal, rustling around in the plant debris, so I ran inside to grab my cell phone. Quickly I returned to find it climbing the pot where the corn was growing. It grabbed onto the corn leaves and climbed up under one and hung underneath. It’s large abdomen, dark eye area, and smaller pointy wings seemed furry and soft. The moth just hung there and I took the first pictures below.

I tried to make it open it’s wings by stroking it’s back with a stem, but it wouldn’t. However I managed to see that there were a few pink stripes on the abdomen closest to the thorax. Could this be a newly emerged hawkmoth from the caterpillars that were on our vines earlier this spring? I had read that it takes perhaps two months for the burrowing caterpillars to emerge from the soil as moths. Since it is the last day of April 2021, this would make sense. So then I went back into the house and left it there under the corn leaf.

At 11pm I decided to go out once more to check and see if the moth was still there. It was! This time looking much different! The coloration was much more defined and the abdomen had shrunk some, as well as the wings extending to cover the abdomen. For sure, this looked just like a photo I had seen online of a hawkmoth. Light and dark grey striped body and wings, with pink areas on the hindwing. I called up a neighbor who is really into insects and she came over to see it. As she approached, the moth was vibrating it’s wings and took off into the air and flew into some vegetation across the street. It was really a treat to see this first flight of a newly emerged moth. We wished it good luck and I silently invited it back to the garden to lay eggs on the sweet potatoes to start the next generation.

My original post from first week of February 2021, when we discovered caterpillars: https://datepalmsncamels.com/2021/02/08/discovery-in-our-garden-striped-hawk-moth-caterpillars/

One Reply to “Emerging Hawkmoth in the Garden Tonight!”